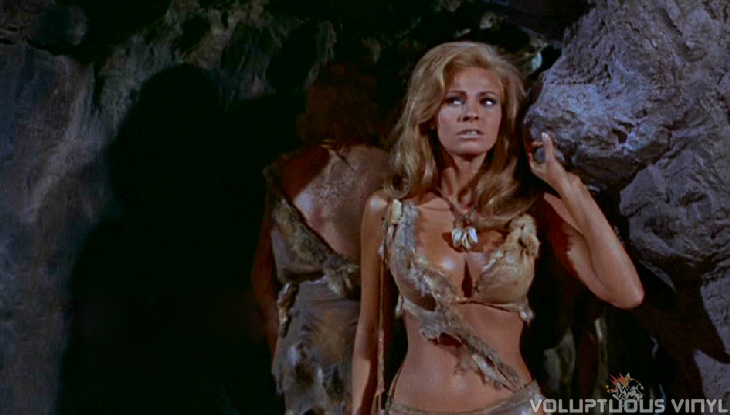 When it comes to cult cinema in the United Kingdom, Hammer Films reigns as one of the most well known and popular production companies from the 1950's to the late 1970's.  Known mostly for their horror films, Hammer actually produced an extremely broad range of films, which we'll explore in the future.  General film audiences should be familiar with one of Hammer's most successful productions, a film that solidified American actress Raquel Welch as a certified sex symbol. 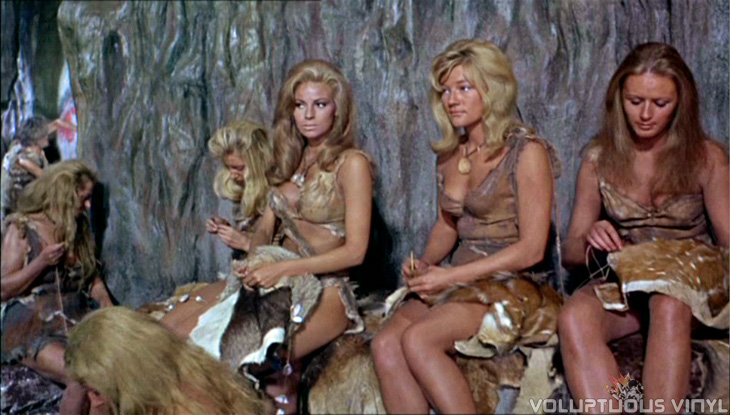 One Million Years B.C. not only sparked a flurry of prehistoric knockoffs in the late 1960's and 70's it also established the career and sex symbol status of one Raquel Welch. Yes, before the iconic Farrah Fawcett poster was gracing the walls of teenage boy's bedrooms it was Raquel Welch's iconic prehistoric fur bikini poster that was pinned to boys walls. 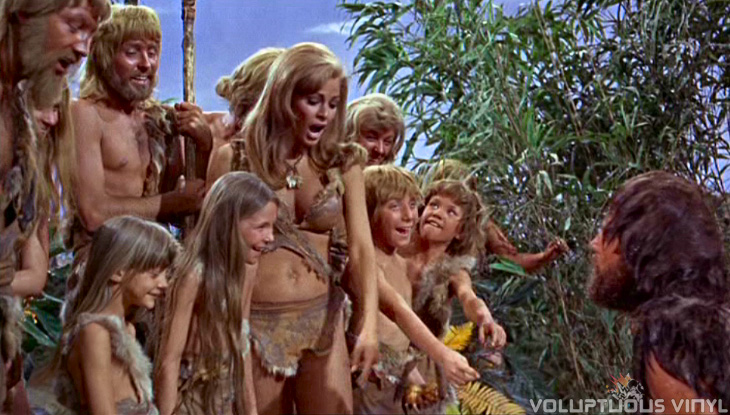 One Million Years B.C. follows the exploits of Tumak (John Richardson) the son of the Rock Tribe leader. A particularly cruel group, always fighting one another, extremely primitive in their abilities and habitat. Tumak does something that displeases his father and is therefore tossed off the mountainside, his woman Nupondi is then taken by Tumak's brother Sakana for his own. Surviving from this treacherous fall Tumak journeys far away where his tribe has never ventured before, eventually arriving at the coast and promptly passing out from his long ordeal. To his great fortune he's discovered by the lovely Loana (Raquel Welch), daughter of the Shell Tribe leader, who live along the coastal regions. This tribe is the polar opposite of Tumak's tribe, extremely friendly, intelligent and very ingenious. Loana nurses Tumak back to health but Loana's man begins to grow jealous of her affection towards Tumak, leading to a fight. Tumak is thus banished from yet another tribe and sent packing, but this time he's accompanied by Loana. 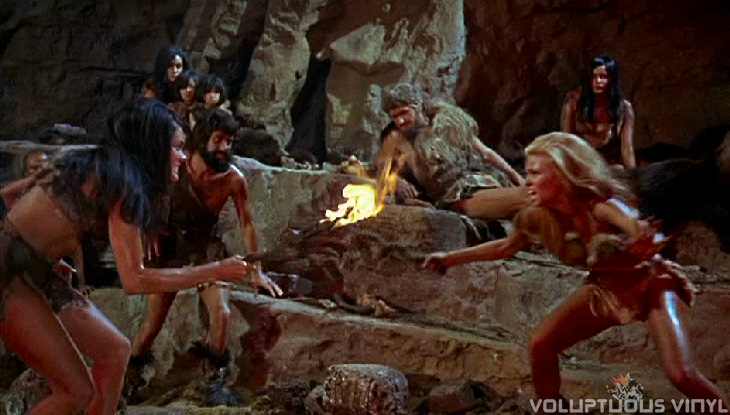 Loana and Tumak make their way back through the barren wasteland to return to Tumak's tribe, attempting to avoid dinosaurs and strange ape people. Now the leader of his former tribe, Tumak's brother, Sakana is waiting and ambushes Loana, but Tumak manages to restrain him and then take control of the tribe himself. The rest of the film features the trials that befall Loana as she attempts to assimilate into this savage group, having to prove herself in "cat fight" with Tumak's previous mate (another lovely Hammer actress Martine Beswick, and the highlight of the film), as Tumak must deal with his brother's continuous attempts to kill him and regain control. 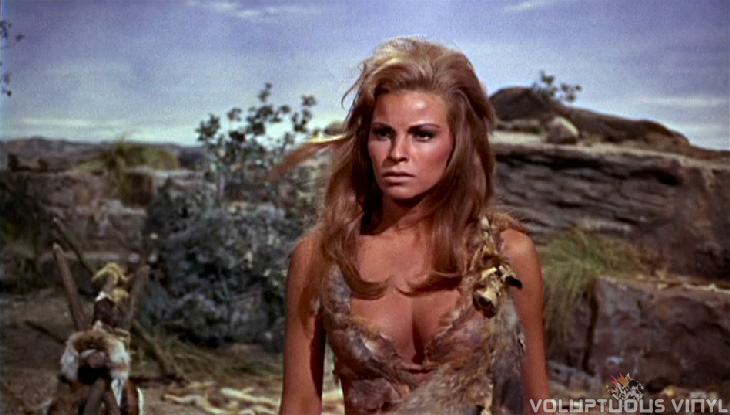 One Million Years B.C. was not only Hammer's biggest commercial success but also their most expensive production. Hammer purchased the rights to remake the 1940's version similarly titled One Million B.C. and originally planned to re-unite Ursula Andress and John Richardson who had starred together in Hammer's epic remake She. When Andress turned down the role the distributors over at Fox called up former TV weather girl Raquel Welch who had recently finished a role in the science fiction / fantasy Fantastic Voyage. At the time Welch decided to take the role thinking nobody would remember it, how wrong she was! It was Raquel Welch's feminine form and famed animator Ray Harryhausen that would make not only make One Million Years B.C. Hammer's crowning achievement but also carve out for itself a niche in cinema history. 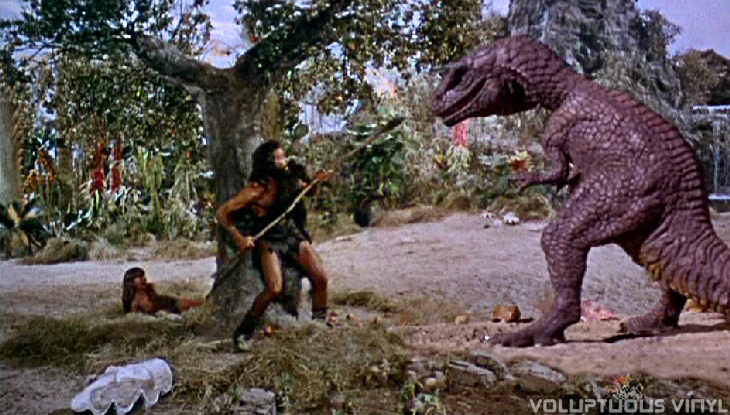 Having first seen two of Hammer's attempts at resurrecting the success of One Million Years B.C. (Slave Girls and When Dinosaurs Ruled The Earth) I wasn't expecting a whole a lot from the film that started it all. When Dinosaurs Ruled The Earth was Hammer's attempt at capturing lightning in a bottle twice, without anything near the success both in terms of entertainment and quality. Quality aside the two films are seemingly identical, accept One Million Years B.C. fails to annoy quite as much.  The film's key success is execution, instead of spending a lot of time in pointless discussions in a fake language (and very little use of the word "akita"). One Million Years B.C. does what a film with such limitations forced upon it can do, keeps things moving. The beginning of the film is actually rather humorous, which was unexpected yet enjoyed, and progresses as a mildly entertaining adventure with a simple story that's easy to follow. 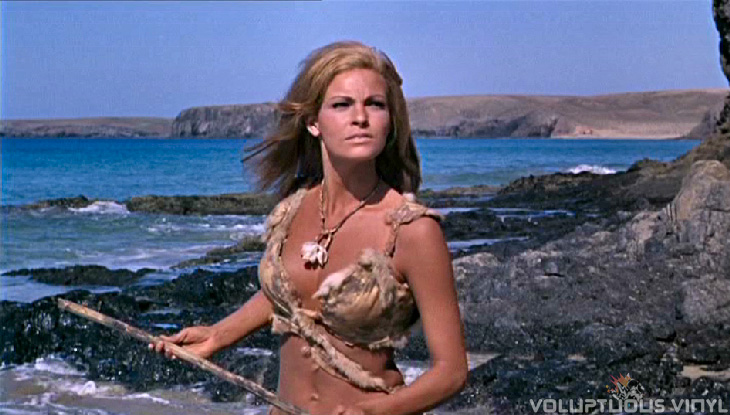 Not being a big fan of the prehistoric fad, which only spanned a few years following this films release, One Million Years B.C. would definitely be my pick for the best in the some what sub genre.  While the story is slightly better than most of it's competition, the real advantage this film has is Raquel Welch.  While I've never found Raquel particularly talented in terms of acting there's no question of her beauty, and for that she fits the role perfectly.  In this case a role where she has no actual dialogue probably helped to force her to step up her acting and as a result is probably one of her best performances. 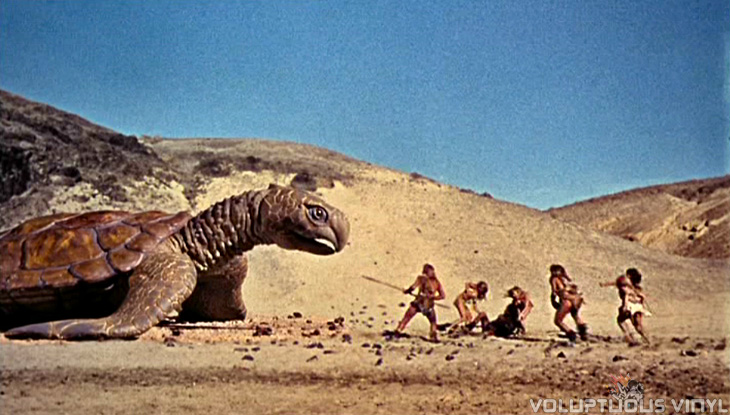 Overall, One Million Years B.C. is worth a look, it's definitely a campy film, for instance the giant tarantula, the giant sea turtle, and the giant iguana all of which were sorely out of place when compared to the dinosaurs in the film.  The whole separation of brunettes and blondes was puzzling, as everyone in the Shell Tribe was blonde while everyone in the Rock Tribe was brunette.  But in the end it's all brainless entertainment, and for this type of film I don't think you'll find anything much better.