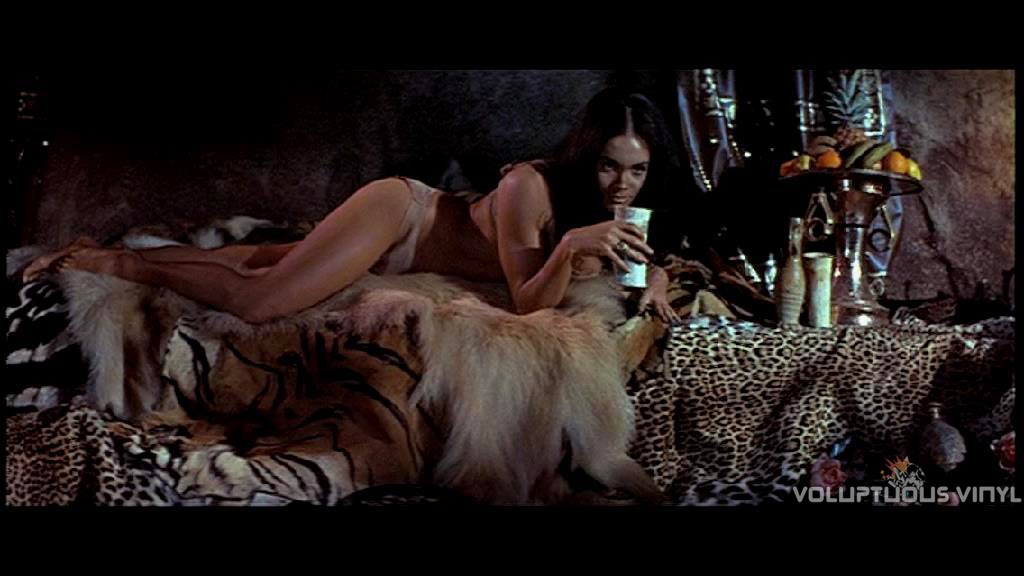 While One Million Years B.C. spawned a plethora of copy cats, not even Hammer itself could recreate the cult success of Raquel Welch in a fur-skin bikini.  Hammer's multiple attempts at regaining the cult status in some of its prehistoric adventure films didn't seem to pan out too well.  One such film was Prehistoric Women (originally titled as Slave Girls in the UK). 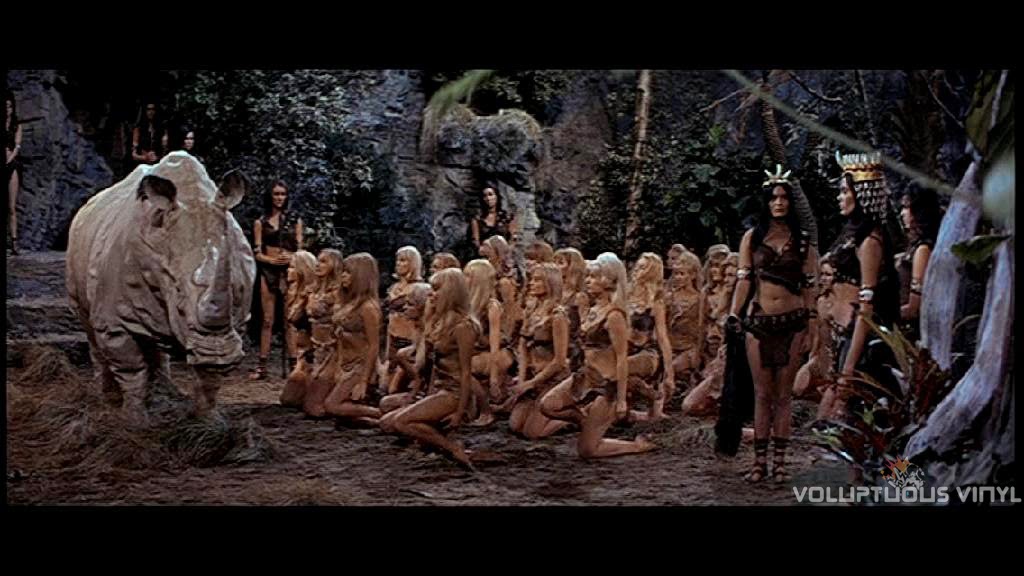 Interestingly enough, even though it was released after One Million Years B.C., the two were filmed simultaneously, with Prehistoric Women wrapping up first. Both productions shared costumes, as well as some cast members, most notably the lovely Martine Beswick.  Yet Prehistoric Women received a polar opposite response, and never gained the same cult status as its sister film, in fact many write it off as one of Hammer's worst productions. 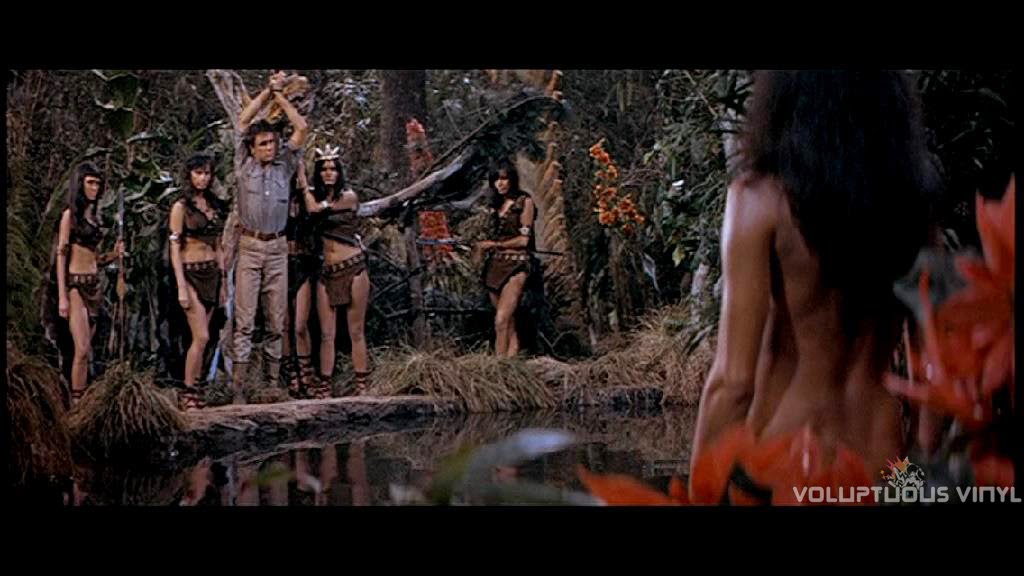 The film centers around jungle guide David Marchand, who finds himself transported back in time after trespassing onto a dangerous native tribe's land, who worship the reportedly extinct white rhino. Marchand is captured by a group of lovely dark haired beauties whose leader, Kari (Martine Beswick), chooses him as the object of her desire. In his refusal to yield to her advances he finds himself locked away with the rest of the men of the tribe. 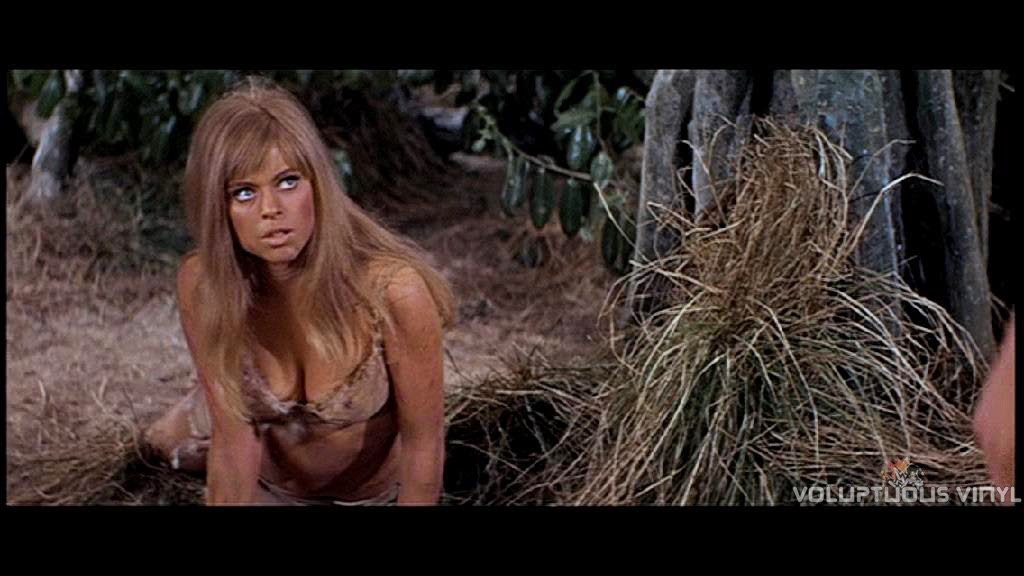 But the men aren't the only ones held hostage, blondes are treated as slaves and regularly bartered off as peace offerings to the savages who live in the wildness of the open jungle. Marchand quickly falls in love with one of these blonde beauties named Saria (Edina Ronay).  Together they plan to overthrow Kari and her followers in hopes of bringing equality back to the tribe, ridding themselves of her control and the fear of the savages that terrorize them. Prehistoric Women, and the oppression of blondes, follows the similar plot revisited in Hammer's third prehistoric film, When Dinosaurs Ruled The Earth. Where that adventure fails to succeed, this film manages to get right. First, this is the only one in Hammer's prehistoric series to incorporate English dialogue, a blessing for those who might have grown weary of the made up language peppered in the other films. And secondly, for a male audience, out of all outings this has the least amount of men, giving most of the screen time to beautiful women running around in "fur-kinis". Something Martine Beswick looks very good in! 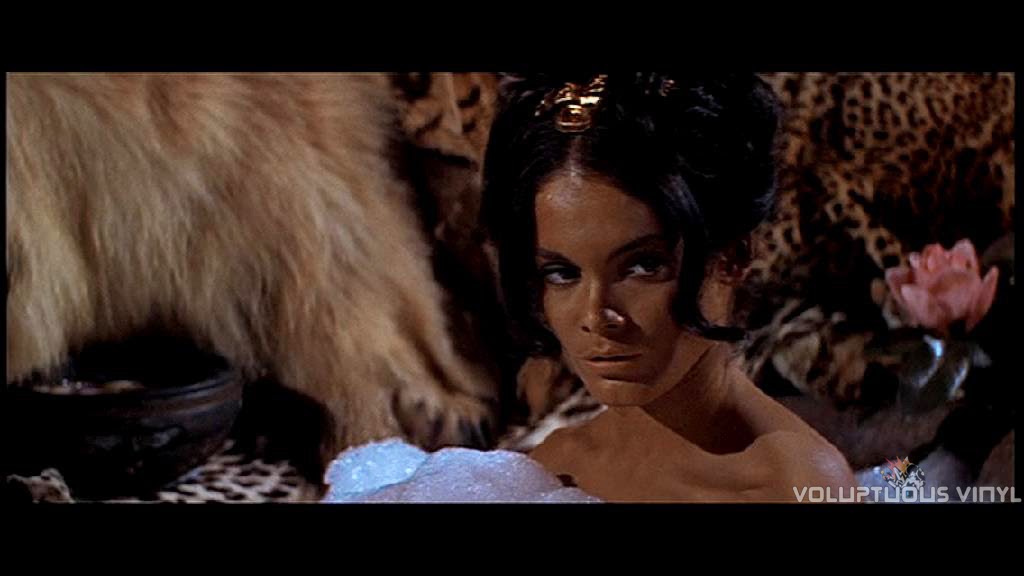 Having seen three out of Hammer's four prehistoric adventures, Prehistoric Women is a narrow second to One Million Years B.C.  Like all the prehistoric films, the story is mediocre and at times extremely corny, but at least it's easy to follow, understand and enjoy for what it is, which is hard to say at times for some of the other films.  Martine Beswick fits the part of a sexy sadistic queen perfectly and it's a shame she didn't receive more recognition for her performance, which puts Raquel Welch's standing around and looking pretty in One Million Years B.C. to shame. 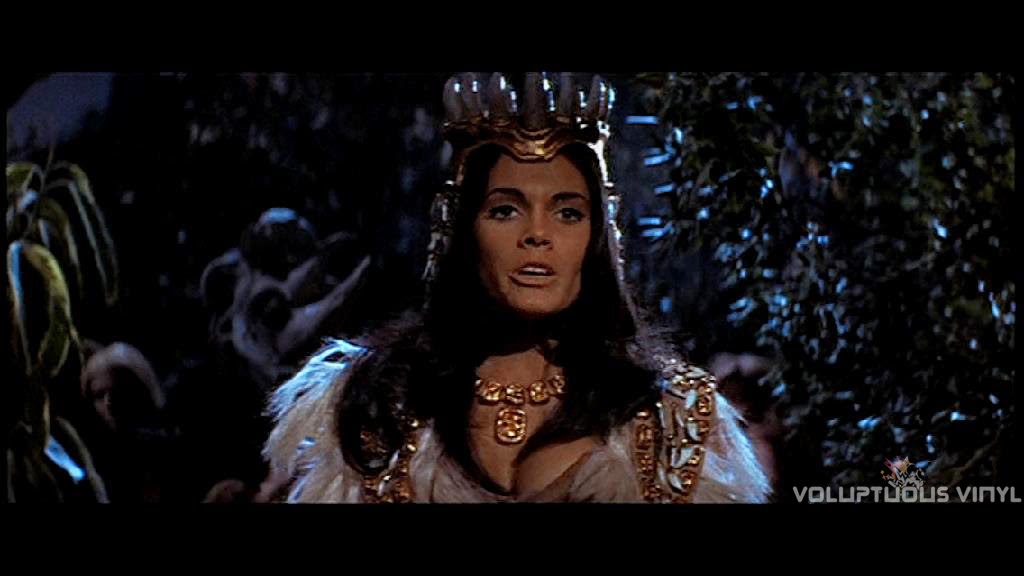 Sadly today Prehistoric Women appears to be almost a forgotten memory in the franchise.  There's not much written about it in many of the Hammer reference books and if there is anything, it's usually negative.  Many consider it to be one of Hammer's worst films, and Martine Beswick was even awarded, "The Worst Hammer Film" award in 1994 at FANEX.  Authors of Hammer Films: An Exhaustive Filmography go as far to say the film is an embarrassment to include it in their book!  I find all the criticism a little overblown, Prehistoric Women is far from the worst and I believe much more entertaining than some of Hammer's other fantasy endeavors.

Overall, Prehistoric Women is pretty well done compared to some of its counterparts (both Hammer produced and otherwise) and it's a shame that it never received the credit it was due.  Since it had already been completed prior to the release of One Million Years B.C. had it been released first maybe it would have received a warmer response.  Instead it was pushed out a couple months later and forced to live up to one of Hammer's most successful films, along with twenty minutes being edited out of the final cut.  This all likely played a role in its critical dismissal. But even while being blacked out in the shadow of Hammer's prehistoric flagship it's a film that's definitely worth checking out if your a fan of the sub-genre, and in my opinion is still one of the better prehistoric films to come out of the 1960's and 70's, which granted probably isn't saying much.